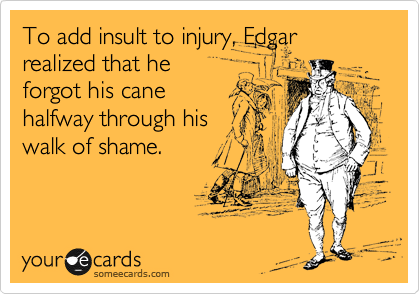 In today’s exploration of modern expressions that were used in the Regency Era, I’m only looking at one in particular. The idiom, “adding insult to injury,” which means making a bad situation worse, has a long history. It is, in fact, one of the oldest expressions that we still use today. So, let’s take a look:

Add insult to injury — This phrase dates back to Ancient Greece in Aesop’s Fables (Aesop lived between 620 and 560 BCE). In the tale of The Bald Man and the Fly, a fly bit the head of a bald man, who hurts himself when trying to swat it.  The fly jeers, “You want to avenge an insect’s sting with death; what will you do to yourself, who have added insult to injury?”

The expression first appears in English in 1748 in Edward Moore’s sentimental comedy, The Foundling:

The expression was regularly in print from the 1770’s forward, a particular favorite for politicians. As for the Regency Era, people used the expression abundantly. My favorite example is from the Ladies’ Monthly Museum, Vol. 6 (1817). (I included a screenshot of the title page because I found it rather delightful.) In a serial story called, “Motherless Mary,” respectable Mr. Morley tries to reason with the betrayed Mary, who is wronged in life and expects no love:

Morley perused [the letter] with evident rage and indignation; then, tearing it to pieces exclaimed, “Detestable malice! vile artifice! “Mary,” he continued, taking her hand, “I can now explain all this; listen to me with composure, and you will find that, if I have injured you, it has been unintentionally. That I love you, Mary, I will not deny–” “Stop, sir,” cried Mary, hastily, “your expressions give me more terror than satisfaction; this is no time for trifling, it is adding insult to injury.”

Thus, I declare this expressions quite safe to use in any Regency context.