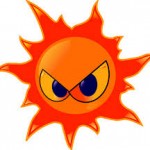 Tip Nine: At some point, someone is going to criticize you on social media.  Do not engage.  Repeat: Do not engage.  No matter how perfect you think your snarky response is, don’t use it.  Always, always be polite.

In some ways, this may be the most important tip I can give you because it’s the most tempting to ignore. It’s hard to sit around while someone says something disparaging of our work or ourselves.

But do not respond with anything resembling anger. Keep calm. Authors rarely come out of confrontational interactions with all their readers feeling warm, fuzzy thoughts about them. Furthermore, if you end up in some sort of back-and-forth exchange, suddenly the focus is on that exchange and not on your book or the positive things you want projected as an author.  People will focus on the negativity, and that’s not what you want.

Come up with a few polite ways to end the interaction if you feel like something needs to be said.  If Reader X says, “I hate your books!  Your characters are stupid!” then reply with no more than a “I’m sorry you feel that way.  I always hope readers will enjoy what I write, but I know I can’t reach everyone.”  See, it’s polite, and while it doesn’t agree with the criticism, it also doesn’t contradict it. Any contradiction is likely to lead to the treacherous path of an argument.

If instead you were to say, “Well, you don’t have to read it!” (which is still mild compared to some replies I’ve seen), you’re inviting a reply that might be worse than the original post.  Fights on social media are never flattering to an author no matter how wrong the other party is.  You may be unwittingly asking other people to join sides, too, which is the worst because then you’re no longer in control of the dialogue and people may even say things in your defense with which you do not agree.

The worst type of response you could make would be: “You’re stupid!”  Do not get insulting with anyone on social media.  You will look unprofessional and lose followers over it. Do not break this rule.

Also, be fairly prompt in your response. Inactivity may look like your ignoring the person, or it may give another person a chance to jump in and answer for you. Your delay may look like endorsement of other people’s responses–and this may be bad if their opinions don’t mesh with yours, if they’re resorting to insults, etc.

On Facebook, I’d hesitate before deleting a post on a page you administer. Only do so if the comments on the post become a problem or if the post its self is somehow offensive (ie, swearing, cultural insensitivity, a clear case of trolling, etc.) . Here’s the deal: if you delete it there, that person will probably be offended and complain about you elsewhere. Your readers are going to expect that not everyone loves you–I don’t think there’s one book in the universe that everyone can agree is great. (Except for The Princess Bride. We all know that’s wonderful, right?). Hopefully, your wall will be filled with compliments elsewhere to drown out these nay-sayers. This is definitely an area, though, that you’ll need to rely upon your own instincts and judgments.

*Note that my advice differs when you’re dealing with reviews on Amazon or sites that aren’t really social media. In those cases, where the reviewer isn’t really trying to address you as they would by writing on your Facebook page or using your Twitter handle, ignore it if at all possible. If it’s a venue where they aren’t expecting a response from the author, don’t give it to them.

Tip Ten: Avoid the same current events topics that you would avoid on a job interview. If it’s not something that’s reflected in your writings, don’t surprise them with controversial topics in your social media. Be sensitive to differing viewpoints from our own.

In an ideal world, your readers will come from a vast array of backgrounds and have a multitude of political/societal/religious beliefs. Be sensitive to that.

For example, I write Regencies, so my readers are not going to expect my opinions on the upcoming American presidential primaries. If I do start discussing it, I need to do so with care because chances are that such a topic is going to wind up in an argument. See Tip Nine for why I’d recommend against that.

There are, of course, exceptions to any rule. Courtney Milan, for instance, engages in deft discussion of the law on her Twitter account. She’s a former Supreme Court clerk, so it’s not surprising to find that she is interested in this topic. Occasionally, some people do not appreciate her opinions, but she always handles it with deft grace. Her discussions are engaging and thoughtful, and I would venture to guess that she’s gained followers from her expertise.

And none of this is to say that you shouldn’t be a legitimate, real person on social media. My point is that you should think a little bit about what you say and how you say it before you fire off that tweet.