Time for Writing When Godzilla Attacks

Aside from queries about my manuscript, the question I get asked most is: “When do you find time to write?” It comes generally from two types of people: (1) non-writer friends who are curious; and (2) other writers. My response herein is aimed at the latter.

The short answer is, of course, “I don’t always find it.” With How to Get Away with Marriage, I treated writing as much as possible as a job, making no excuses for being too tired, too sick, or wanting to do something else. But, let’s face it, that doesn’t always work.

Through the first rough draft, I was able to stick to a schedule of writing when both my boys were in school and then at night.  Mainly, I worked at the local coffee shop and spent a small fortune on fair-trade coffee drinks. And then… 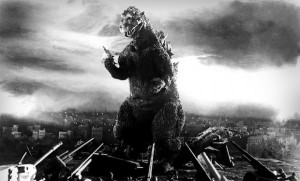 Summer began, and my house was consumed by construction. I think the construction actually ate my house and my life. I had to be home to make sure the house was secure and to answer any questions from contractors. Have you ever tried to write so much as a grocery list with jack-hammering pounding in the background? It doesn’t work. How about when your basement experiences a muddy flood that would give the Bible a run for its money? (And yes, the flood then required a new construction project in the basement in addition to the ongoing one upstairs.) It felt like our home was under attack from a hundred-foot tall monster.

Add in two wonderful conferences–the RWA Conference in NYC and the Georgia Romance Writers’ Moonlight & Magnolia conference–and my free time shrunk a considerable amount this summer and fall. (Those conferences were both tremendous–each worthy of their own blog posts, and not Godzilla-like at all.)

So, what do you do when you have less time than you would like to write? This is the question I think most writers are really asking because none of us have as much time as we’d like, and then we feel stressed about it. Even if Godzilla were literally attacking the house, some of us would think, “Gee, I really should be writing. I’m so far behind!” Here’s my advice to myself: First, take a deep breath, and don’t feel guilty. Sometimes things happen in life that I can’t control, and I have to make the best of it. I struggle not to put more pressure on myself than necessary, and guilt isn’t helping anything. Could I stop the flood? Nope. Did I have to get our basement repaired? Yes. Could I possibly write while doing that? No, so I tried not to sweat it.

Second, I look at what’s preventing me from writing and decide whether it’s a poor habit I’ve formed or something outside my control. If it’s a bad habit, it can be fixed. If it’s a giant lizard attacking, on the other hand, I shrug my shoulders and meet that threat without worrying about the writing.

An example of  a bad habit of mine: I was easily distracted when trying to write at home.  I tended to play more on the Internet or got caught up in household chores that aren’t important. My solution prior to the construction had been to leave the house and spend the aforementioned fortune on coffee. Once it started and I had to stay home, I realized I needed a dedicated space. And look: My first grown-up desk of my own! I now have a place that is only for writing. Like magic, it works, and I get more done sitting there than I would at the coffee shop. (The coffee isn’t as strong at home, though.) 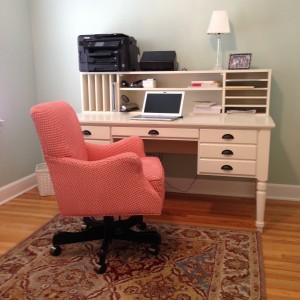 Third, I prioritize and plan. I look at my calendar, find the hours I need for writing, and jot it down. I compare schedules with my husband so that he can watch the kids while I’m out writing on the weekends or at night.  Sometimes writing moves down the priority list a few slots because certain things have to be accomplished at home, at my boys’ schools, etc. Or I have to slay monsters, whatever. When that happens, I write less, and the things lower on the priority list sometimes disappear altogether. While I tried to stay active on Facebook and Twitter this summer, this blog was demoted to last place in terms of importance. It was what was sacrificed in the name of my own sanity. And, as I remind myself, the world didn’t end.

Finally, I find some time to relax. Whether it’s reading a book or watching Project Runway, I make sure that a little bit of relaxation time is scheduled into my day. Even if it’s only thirty minutes of down time, it helps. I can’t write if my brain doesn’t take a bit of a break every now and then.

Who is excited for new episodes of the Gilmore Girls? Me(!), and I plan to watch every single one without worrying that I should be doing something else.