On Choosing a Pseudonym

I wanted a pen name.

Because so many of us have an online presence, I think the choice of having a pseudonym is a more important decision than it was twenty years ago.  On the one hand, I don’t think it is easy to keep a real name a secret today if someone really wants to find it.  That’s fine with me because I don’t want a pseudonym to hide my identity completely.  On the other hand, with a pseudonym, I can choose who I interact with as “Evie” and who I interact with in my personal life.  Keeping my real name a secret isn’t really the point for me.  I’m a mom who occasionally posts pictures of her children, and I want those pictures shared only amongst people I know in the real world.  In the virtual world, “Evie” doesn’t lock down her online accounts–she’s much less uptight than her twin sister.

Once I made the decision to have an alter ego (just like Superman!), I agonized over what to use.  I was almost “Christine O’Neil,” but wouldn’t you know there was already an author out there with that name?  It was back to the drawing board.  The first name turned out to be easy.  I wanted something that sounded old-fashioned because I write historic romance, and I’ve always loved my grandmother’s name, Evelyn.  However, it sounded more formal than what I wanted.  There may be passion, angst, and romance galore in my books, but I also write about sheep stampedes and wayward elderly ladies acting out the parts of Othello at an annual spring festival.  Danielle Steele or Judith McNaught I am not.

Hence, I arrived at “Evie.”  It’s a diminutive of Evelyn, it doesn’t sound too far off from my real name so there’s a chance I may respond to it, and I think it sounds approachable.  I’d like to friends with an Evie.

The last name was harder to select.  It had to fulfill the same parameters I used for the first: It needed to be pronounceable and easily remembered, it needed to be an “attractive” name (in other words, I didn’t want to be “Evie Armpit” or “Evie Fungus”); and, it needed to pair well with Evie.  I found “Jamison” by looking through my family tree. Most of my family came from Scotland or Ireland, so I started looking through my ancestor’s name–Reardon, MacCall, Jones, etc., and, (aha!) Jamison.  I liked the sound of it.

Jamison had the bonus of starting with a “J,” and several best-selling historic romance authors also have “J” surnames.  For any readers who still like to buy their books at a bricks-and-mortar store, I thought having my book near these other writers would be helpful to my own book sales one day.

Evie Jamison.  Now, all I had to do was check and make sure there were no other famous authors using the name and that the logical web address was free. 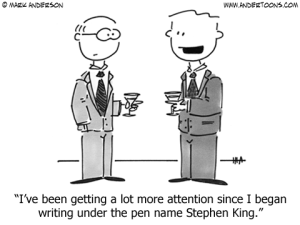 Thankfully, everything checked out.  Evie Jamison.  I skipped around the first time someone called me that.

So, for you authors out there, was a pseudonym something you thought important?