Best of Both Worlds–Modern Language in the Regency Era 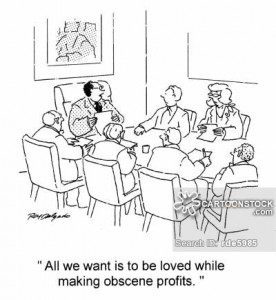 Best of both worlds–This expression took me on a longer journey than typical. I found that it did exist in the Regency Era, but it was used in a much more specific way than today. In modern parlance, this expression means that one can enjoy two opportunities at the same time without the disadvantages. For example, in the cartoon above, the business people want to be both loved and make immense profits–usually the two are mutually exclusive.

I first came across the term in The Life of Christ (1800): “Had not they, then, in their own persons, successfully solved the problem of ‘making the best of both worlds?'” The reference was a little unclear to me as to whether the expression meant the same as it does today, but I find it interesting that it was put into quotation marks. It suggests that the expression was at least well-known or had been used before by someone else.

I didn’t see much evidence of it being used in writings (and I emphasize “writings”–it could have been used in everyday speech), until 1822’s Gleanings in the Fields of Boaz: Now, call it intuition–or call it the fact that the only hits in Google Books I was getting for “best of both worlds” were for religious texts–but I started to wonder if the expression meant something closer to having the best here on earth and then later in heaven. So, I broadened my search to a later time-period to see if I could confirm my suspicions.

In 1853, Thomas Binney, an English congregationalist, uses the expression in precisely that way: This sermon, “Is It Possible to Make the Best of Both Worlds?” was popular. It was printed numerous times and discussed in lectures around England. If the expression wasn’t well-known before then, it certainly was after Binney published his work. He, particularly, used the expression with a religious thrust, and I would expect his popularity to have a great deal of influence on how the expression was used in everyday speech.

Finally, to firm up my suspicions, I came across the Dictionary of English Idiomatic Phrases (1891): “To make the best of both worlds–to manage so as to get the good things of earth and be sure of a good place in heaven.”

Aha! So the two worlds in the expression did mean heaven and earth.  Where does that leave us in the Regency? I’d say it’s safe for Regency writers to use the expression, but I’d also caution that it meant something different than how we use “best of both worlds” today.