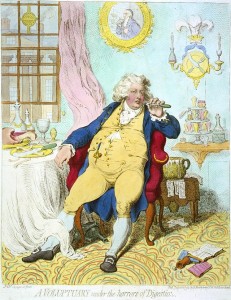 I was in the mood to look at pretty things today, so let’s examine glassware of the Regency affluent.  English glass was dominant in the world from the beginning of the nineteenth century forward.  English lead crystal was considered the finest material and particularly suited to cutting.  Indeed, cut glass from England and Ireland in the first three decades of that century is considered some of the best ever made.

Newer technology and technique made high-quality production possible at the time.  By the turn of the nineteenth century, furnaces could uniformly heat large batches of glass to the optimum level.  Cooling also was well-controlled, which made the product more durable and less susceptible to cracking when later cut or engraved.  Also, glass factories now had steam-powered lathes, or glass cutter wheels, and this allowed for uniform cutting and ease of operation.  No more manually turned wheels! Because of these advancements and others, glass was softer and clearer than in the previous century, and glass cutters were able to use the new technology to make deeper and more numerous cuts to enhance brilliance. Because of heavy ornamentation, the glassware became heavier, and thus more pricy compared to the eighteenth century glassware.  Indeed, the weight of a goblet from this period would seem surprisingly heavy to someone used to 21st century glassware.  You won’t find this at Target!

Commissioning of the most ornate pieces came from the affluent–and yes, services were commissioned by individuals.  Can you imagine having your own set of glasses ordered and designed just for you?  Well, pretend your wine glasses, goblets, decanters, glass dessert plates, etc., were all especially commissioned for you by a glass factory.  In modern times, you might order a dozen wine glasses and a dozen drinking glasses, and a few other things.  Not so if you were a member of the Ton in the 19th century!   The Warrington service, for example, comprised of 342 pieces.  This service was produced for George, Prince of Wales over the four years to 1810 by Perrin Geddes, and all pieces were engraved with the Prince of Wales’ feather motif.  This service set the standard for the affluent of the Regency.   Another fifteen years of advancement saw the production of the arguably more impressive Lancaster service by Wear Flint in Sunderland.  The new Marchioness of Londonderry commissioned a great service to commemorate her husband’s elevation as Third Marquess of Londonderry in 1822, and Earl Vane in 1823.  This elegant table service comprised of two hundred pieces, which included decanters, claret and water jugs, goblets, tumblers, honey jars, finger bowls, ice buckets, butter jars, and almond dishes. There was also a dessert service and a separate wine service.  Most items were engraved with the Londonberry coat of arms and embellished with cut patterns of diamonds, fans and stars.

What characterized Regency cut glass?  The decoration consisted of miter cutting, which is V-section grooves cut into the surface of the glass.  Parallel straight lines were frequently cut to delineate different sections of the glass piece.  Motifs included “diamonds,” which was in effect  a series of small pyramids.  The base of a vessel would often be “star-cut”, and its rim might be “fan-cut.”  In the service below, you can see the diamond motif as well as the parallel straight lines easily. 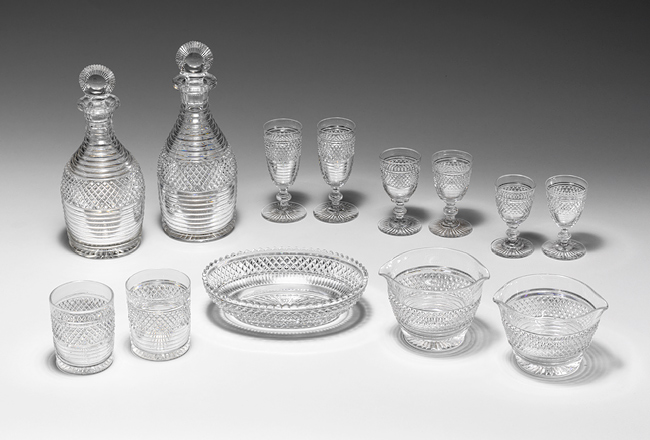 Decanters of this era tended to be barrel-shaped with mushroom stoppers, just like the one below.  Also notice the horizontal lines delineating different sections of the decanters.  The largest section displays the diamond motif, and it looks like the section below has used horizontal and vertical cuts to create the illusion of squares. 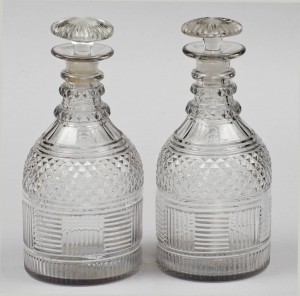 Wineglasses had short stems often with distinctive shaped knops, or ornamental knobs.   The large and small wineglasses in the picture below are reproductions of a Regency glass pattern (and please excuse my poor photography).  Like the originals, the glasses are shorter than what is typical in modern times and quite heavy.  The convex bowls are made of very clear glass (that have much less gray than when you compare it older glass or cheap glass) and are engraved with a floral motif.  Engraving during this era tended to be used only on wine glasses or large vessels. Roman and Greek motifs proliferated, and scrolling leaves and flower heads flourished as well.  Figure subjects were unusual and more common in the Victorian era.  Much of the early-century engraving took place on goblets with a convex sides as below, but the straight-sided bucket shape became the favorite for engraving by the end of the Regency period. 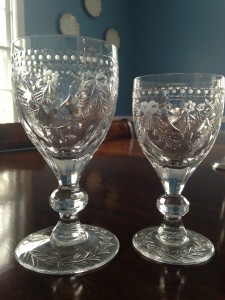 Drinking glasses usually reserved the sharp mitered-cuts for higher on the glass and had flat vertical facets toward the lower part where it would be held.  Bowls were either convex or straight sided.  If you look at the one below, it is convex with a diamond pattern and fan edges. 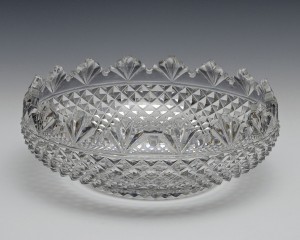 Image at top left: James Gillray, A Voluptuary under the Horrors of Digestion, London: 1792.  This picture depicts Prince George after a heavy meal.  Look at the wineglass and decanter!