I decided to indulge my sweet tooth this month and look into Twelfth Night Cake.  Twelfth Night, or January 5, marked the end of the winter holiday season. The cake, which had the same ingredients as a bride cake, was made with dried fruits and spices.   In wealthy households, these cakes were decorated with sugar frosting, paper trimming, and sometimes sugar paste or plaster of Paris figurines.  A dried bean in one half of the cake and a dried pea in the other were included.  (I suppose these are safer items than small, plastic baby Jesus that are found in King Cakes around here at Mardis Gras.)   Whoever found the bean in their slice of cake was deemed King for the night, and everyone had to do as he said. The Queen was then found with the pea.  Even if these people were a servants, the tradition stood–I imagine this made for some awkward moments.*

In simpler homes, the cake was a typical fruitcake with a dried bean inside. The bean had particular significance as the person who received it was supposed to be a sort of guardian angel for the family that year. Many times, it was fixed so that a senior member of the family got the bean.  I bet there were some unhappy children when that happened!

Twelfth Night, unfortunately for the cake, was banned as a day of revelry by Queen Victoria in 1870. Apparently, celebrations had gotten too out-of-hand. Thus, the Twelfth Night Cake became known as Christmas Cake afterwards.

Recipes for Twelfth Night Cake prior to the Victorian Era are difficult to find.  However, a good one can be found in Hannah Glasse’s The Art of Cookery, Made Plain and Easy**:

To make a rich cake:

TAKE four pounds of flour, well dried and sifted, seven pounds of currants washed and rubbed, six pounds of the best fresh butter, two pounds of Jordan almonds blanched, and beaten with orange-flower water and sack till they are fine, then take four pounds of eggs, put half the whites away, three pounds of double-refined sugar, beaten and sifted, a quarter of an ounce of mace, the same of cloves and cinnamon, three large nutmegs, all beaten fine, a little ginger, half a pint of sack, half a pint of right French brandy, sweet-meats to your liking, they must be orange, lemon, and citron. Work your butter to a cream with your hands, before any of your ingredients are in, then put in your sugar and mix it well together ; let your eggs be well beat and strained through a sieve, work in your almonds first, then put in your eggs, beat them all together till they look white and thick, then put in your sack, brandy and spices ; shake your flour in by degree, and when your oven is ready, put in your currants and sweet-meats as you put it in your hoop. It will take four hours baking in a quick oven. You must keep it beating with your hand all the while you are mixing of it, and when your currants are well washed and cleaned, let them be kept before the fire, so that they may go warm into your cake. This quantity will bake best in two hoops.

To ice a great cake:

TAKE the whites of twenty-four eggs, and a pound of double-refined sugar beat and sifted fine; mix both together, in a deep earthen pan, and with a whisk whisk it well for two or three hours together till it looks white and thick, then with a thin broad board or bunch of feathers spread it all over the top and sides of the cake; set it at a proper distance before a good clear fire, and keep turning it continually for fear of its changing color; but a cool oven is best, and an hour will harden it. You may perfume the icing with what perfume you please.

Should I ever work up the energy to try to make this recipe, I promise I’ll post a picture! 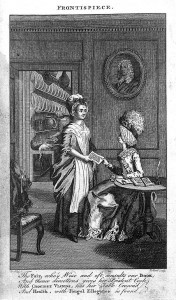 The Art of Cookery, lady and her made

** Hannah Glasse was an interesting figure with a tragic life.  An illegitimate child, she was raised with her legitimate siblings on her father’s side.  She married an Irish soldier, and they experienced financial difficulty through most of their lives.  Her cookbook, which she published anonymously in 1747, brought a brief respite to the financial difficulties.  It was sold by subscription, and also at “Mrs. Ashburn’s China Shop,” according to the title page.  Seven years after publishing, she was forced to sell the copyright for The Art of Cookery.  Three years after that, she was consigned to debtors’ prison for several months.  She tried penning another book, The Servants Directory, but it was never as commercially successful.  In 1760, she wrote The Compleat Confectioner, but it also was not as successful as her first work.  In 1770, she died at age 62.